The process of using a laser to create piano rolls was being discussed in April of 2003 in Mechanical Music Digest (MMD), when Mr. Gerety appeared for the first time in this discussion and announced that he had just been granted a patent on the topic being discussed. He said that he had a device for sale that put the process into practice, and anyone could buy the device from him and create piano rolls. He hadn't posted in the MMD before and hasn't posted since, and nobody has seen the device, been quoted a price nor created a piano roll with this device. The most visible effect that over the eleven years since this patent was granted, the idea of using a laser to create a piano roll has not been discussed; Mr. Gerety did not offer to license his patent and nobody could expect to make enough from creating piano rolls today to offset the cost of this (unseen) device nor litigation if they tried to do this on their own and risk a patent infringement situation. My question is, since the only measurable effect of this patent was to stop development of the patented process, and Mr. Gerety doesn't appear to have made a single penny on this patent, what would it take to disallow or eliminate this patent?

I assume you are referring to patent document US 2003022057. The top part of the front page is below. In the upper right hand corner it says Pub. No.: That is an abbreviation for Publication number. This document itself is an application for a patent, not evidence that a patent was issued. This is the only document that comes up with a search of the inventors name, the word piano and the word laser. No corresponding granted patent comes up.

As you can see below further below the status of this application as of 2006 was abandoned. 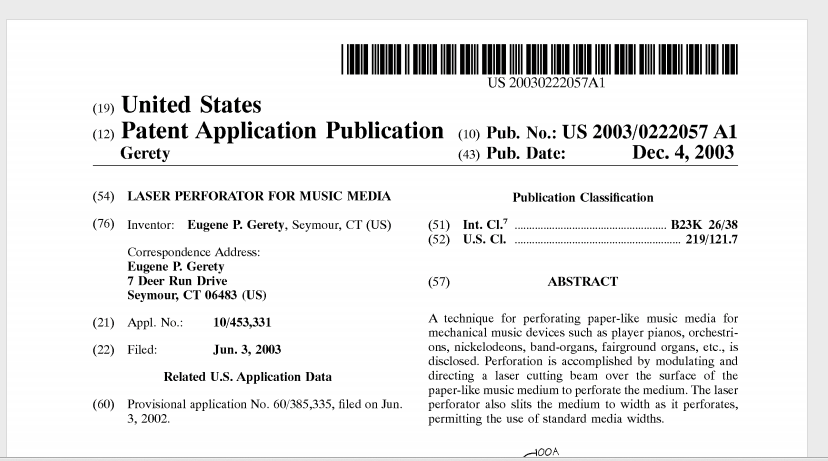 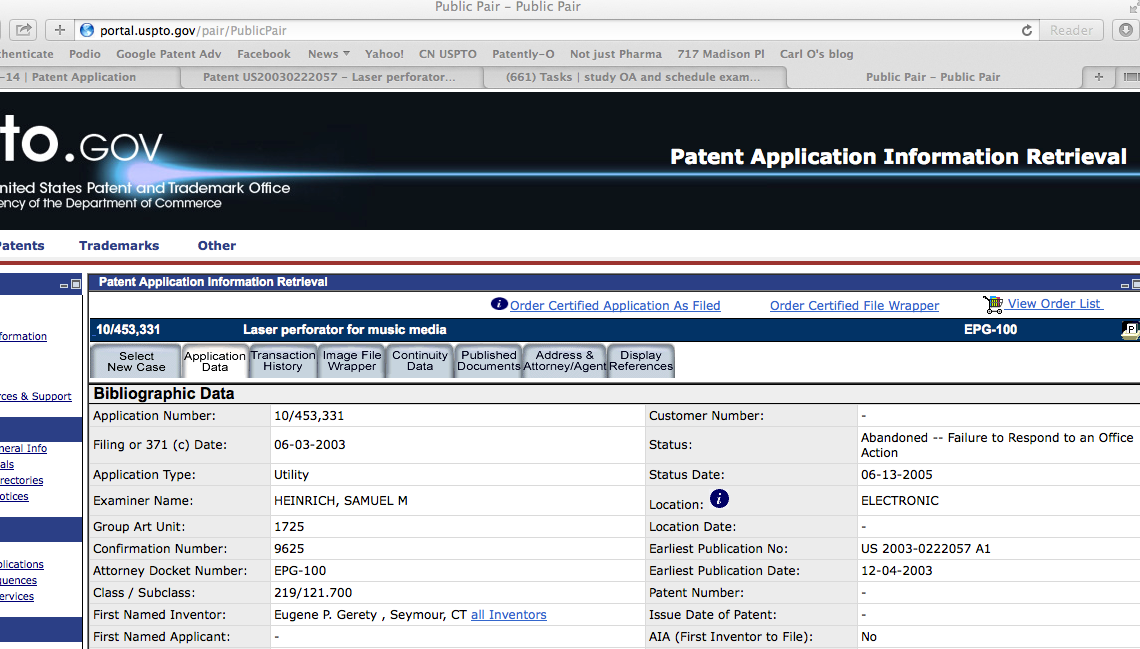 2
Instructional video
2
Can employee whose company filed for patent name himself as co patent holder?
0
Can I patent a process in US being from another country?
2
Validity of patent on Merkle Trees
1
Raked wingtips are not new... What can be legitimately patented?
0
Is this patent US 6,910,697 still valid and in force
1
How to protect my idea/prototype at little or no cost?
0
We didn't patent a possible innovation before the release. What are the risks?
0
Is it possible to have the total freedom to operate for a method patent?