Can a method of teaching based on research be patented

My partner and I interviewed hundreds of high-achievers and reverse engineered their process to discover universal practices and methods of goal achievement. We wrote a book on the subject. Then a school asked us to develop the research into a curriculum to teach young people the practices and methods derived from our research. Can the curriculum be patented?

A method of teaching is likely to be rejected as unpatentable under §101 (commonly used to reject software and business methods, but it seems like teaching would be treated similarly). @EricShain is likely correct: copyright will probably be more useful to you.

Whoever invents or discovers any new and useful process, machine, manufacture, or composition of matter, or any new and useful improvement thereof, may obtain a patent therefor, subject to the conditions and requirements of this title.

That looks pretty broad -- anything you invent or discover, you "may obtain" a patent for. And there have been court cases that say patents can cover "anything under the sun that is made by man." But!

More recent cases have poked some holes in that -- think about DNA, and chemicals or compounds isolated from plants...those may be discovered and isolated by man, but not made by man. And so they are sometimes tricky to get patent coverage for.

Similarly, in other technical areas, courts have said that mathematical formulae and laws of nature are not patentable -- a common shorthand you'll see is that they're "abstract ideas."

Patent attorneys say "rejected under §101" to mean that the examiner says the invention is not eligible for a patent because it doesn't fit into §101 for some reason. In the present question, I'm guessing that a teaching method would be one of those inventions.

Of course, I'm not an examiner, I don't know any more about your invention than what you've written above, and I have no idea what you'd be trying to claim. It's entirely possible that you're doing something that is patentable. For example, if you had built one of those sci-fi machines that looks like a colander with wires sticking out of it, and you can download information directly into somebody's brain, there's a very good chance it is patentable. 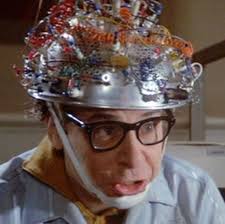 But a textbook (no matter how well-researched and -written)? Not so much.

In oral arguments on a patentable subject matter case, Justice Scalia rhetorically and humorously asked if he could patent a "method of keeping students awake in a constitutional law class". (I do not remember in which case.) Unfortunately for patent law, this struck the justices as funny because, of course, it couldn't be patentable.

Incorrect - "Method of keeping students awake in a constitutional law class" is only the preamble of a possible claim. What are the steps? If they are by thinking positive thoughts or imagining the students are giant ants, then no. If it was by following a particular order of topics, inserting jokes at specific intervals and modulating the voice in an odd manner, probably no.If it involved a selective application of electric shocks to their seats, then probably yes.

Not the answer you're looking for? Browse other questions tagged process education teaching school curriculum .

12
Revising a poor English translation of a US national phase application based on a foreign language PCT application
6
Can I patent my logic for a pantry management system?
4
At what point can a patent lawsuit become reality?
0
modified process of known process can be patented?
1
Is the Amazon Locker Patented?
3
My old patented invention appears to be patented again
1
Can I patent this process or workflow?
0
Can I patent a process in US being from another country?
1
Is it possible to patent a new general method of optimizing some industrial processes?
1
Patentability Of Parameter Optimization For Previously Patented Process