Is this invention novel and patentable?

1. A laptop computer system having an extended touchpad functionality, the system comprising: 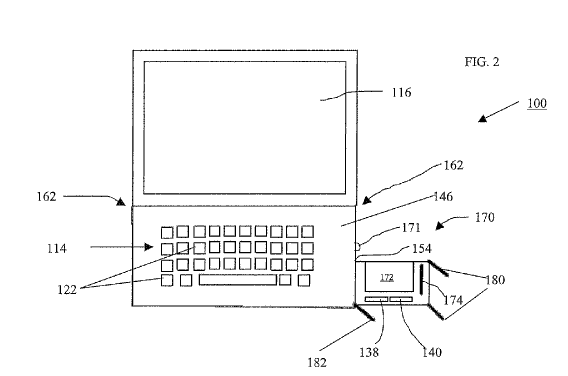 According to the USPTO's PEAR database, the application was abandoned as of May 2011. The examiner rejected the claims based on obviousness in light US 5949643, which disclosed something similar. The patent disclosed two separate embodiments: one with an extendable touchpad, and another with hinges connected the screen to the base. The examiner felt it would be obvious to combine the two.

The big question is when Google Patents will include the USPTO file wrapper so we don't have to use the terrible PEAR site to get that information.

Not the answer you're looking for? Browse other questions tagged prior-art computer-graphics ibm us20080316176 or ask your own question.

10
Could Apple's recent patents be based on prior art?
17
CALL FOR PRIOR ART: (Nintendo) Object transparency based on distance in virtual environment
8
How to invalidate a patent with prior art?
1
Smartphone Apps: Difference between a device and software?
0
It seems this is being used by major companies. How broadly or narrowly are patents interpreted?
3
An obvious prior art… mobile phone
1
Ethical problems with application
0
Microsoft Modular Computing Device - Prior Art Request
2
How to deal with prior art with absurdly broad claims?
1
Does my invention infringe on this hardware/software system?