Approximately how long does it take between Filing date - Issue date in USA?

There is only 6 months between filing date and issue date of us7445677 patent. Am I missing something? 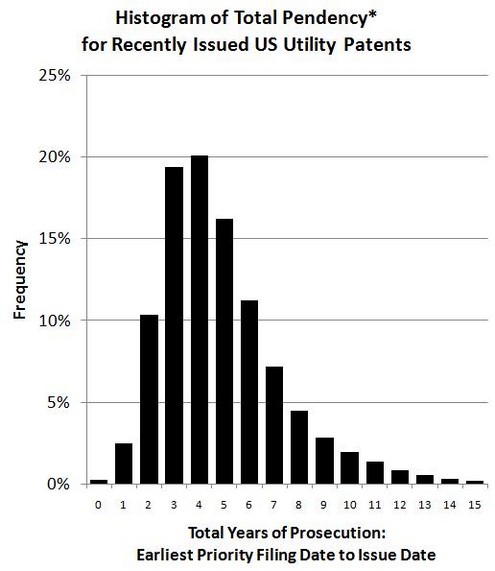 The basic answer is that the average pendency for an application is just over five years from the earliest priority filing and about 3 1/2 years if ignoring priority filings (such as provisional or parent applications). The USPTO reports an average pendency of 2.8 years by (1) ignoring priority claims and (2) counting the RCEs as new application filings. As the chart shows below, there is a large amount of variance and so it quite likely that any particular patent's pendency is far from the average.

The patent that you mention above (US7445677) did issue in only six months. In that case, the applicant had filed a petition for accelerated examination. A discussion of different ways to accelerate examination is available here: Discussion of Options for Accelerationg Examination

Not the answer you're looking for? Browse other questions tagged usa filing us7445677 or ask your own question.

3
Does filing a patent protect you abroad?
3
US non-provisional application for a non-resident
0
NO PATENT ISSUED AFTER FILING NINE YEARS AGO, WHAT DOES THIS MEAN?
1
Can I file test/ null provisional/ non provisional patent?
1
What is the difference between the filing and priority date, since it is the same date for this invention?
2
How can the difference between “Priority Date” and “Filing Date” be greater than 1 year?
4
Does same owner's prior application count as of filing or publication date?
3
Filing with PCT first before any national application
0
Can I refile my own provisional patent that has lapsed due to delay in responding to USPTO?