Non-novel/non-inventive patent of subcomponent of device that was already previously patented?

When researching the aforementioned technology, I noticed a patent that was published in 2018, by different inventors, for a subcomponent of the technology. It could, possibly, be considered that this new patent (by the new inventors) does not explicitly and completely specify this subcomponent in the same way as in the researchers' patent, but it effectively does. This subcomponent was not the main focus of the patents by the researchers, but it was, as I said, a subcomponent of the device, and, as such, it is specified in the description (both in textual and graphical (for instance, as a module in a flowchart) form) and mentioned in the claims. (To be clear, since it is a subcomponent and not the focus of the patent, the claims do not focus on the subcomponent itself in such a way as to patent the subcomponent; rather, the claims focus on the device itself, thereby mentioning the subcomponent in the context of that larger system. However, the device description (that is, all the information before the claims in the patent), does include much more information about the subcomponent.) Being included in the description and claims, the subcomponent is heavily implied to be a certain way (in a utility sense -- not to be confused with a design sense), even if this is not stated explicitly and completely. First of all, the context (use case for the technology, etc.) of the patent is precisely within the same area/scope as the aforementioned patent (and this is so in the patent claims themselves -- not just the description). Secondly, the type of surface on which the technology is specified to act, and the body on which it is specified to act, is identical to that of the researchers' patent, and is specified as part of the claims themselves. Lastly, the mechanism of action (radiation), and the device/technology that is responsible for this mechanism of action is identical to that of the researchers' patent. The only differences seem the be the following:

With regards to 1., my understanding is that patents are on the technology itself, rather than on how it is used (or, in this case, what it is used to measure), right? So it seems to me that this would be invalid.

With regards to 2., if we ignore how the technology is used, these are just blatantly obvious ideas that, it would seem to me, a reasonable person would deduce as having been obviously implied by the researchers' in their patents. In fact, this just seems like a game where the new inventors have (1) extracted a subcomponent of the larger device, (2) changed precisely what signal is being measured by said subcomponent, and (3) added some of the processing/communication modules that would have already existed in the larger device, effectively making the subcomponent its own "standalone" device (although, it is technically already a "standalone" device, from an engineering standpoint, as an embedded system that is part of a larger system/device).

As I've said, this is only a subcomponent of the technology that the researchers' patented, so, if my understanding of patent law is correct, it is not itself patented. However, my point is that it is (effectively) described, in this form, in the researchers' patent itself, and so, it seems to me that it also cannot reasonably be patented, no? Especially considering the fact that, based on everything I've described, it seems that the new inventors did not do anything novel/inventive here? But the U.S. Patent Office did issue them the patent, which seems ridiculous.

And I've purposely waited till the end to include this, since it is legally irrelevant, and I didn't want it to affect the judgement of those answering, but, upon seeing the (foreign) names of the inventors and Googling their corporation in question and seeing the website, it seems clear that this is a "patent troll". Based on the similarities I've described, it seems very likely that these trolls saw the patents of the researchers and then decided to do this, as opposed to having invented this independently.

Based on my following of the researchers' work, I was planning to use the technology in precisely the way that the new inventors have patented it (and I presumed that this would be fine, since, as I said, it is a subcomponent that, although described in the patent, was not itself patented, and therefore it is not patentable, right?).

So, what do you all think? Is this patent likely to be invalidated in a legal battle, as I suspect? If so, then I will ignore it and continue with my startup work till the time comes (and I'm better financially positioned to attack it). At this stage, before it escalates to a legal battle, can the USPTO be appealed to review and invalidate it? I would greatly appreciate it if people would please advise me (not as formal legal advice, obviously) on this.

EDIT: Another possibility is that I could also contact the (very well-known) institution that the researchers' work for and try to convince them to pursue it, but it's possible that they decline to do so, so I'm more-so concerned about my personal options.

EDIT 2: I want to emphasize the following: The subcomponent in question has already existed as a device on its own (that is, it is itself a device) for many years, so the subcomponent itself cannot be patented. Furthermore, there are research papers that were published years ago on the same uses for such a device (but, as I said, my understanding is that a patent is not based on use case, but on the technology itself, so this doesn't matter). So, thinking about this further, it really does seem that the only difference is that the new inventors have added a "data processing module" and a "communication module" to have a, what they call, "integrated device", and that's it; that is the only part of the claim that differentiates this subcomponent/device from a typical version of the device (the typical version might be connected to a computer for data processing, for instance). So how can this be patentable? I don't see how adding a "data processing" and "communication" module, and calling it an "integrated device" is novel and/or inventive? This is obvious stuff. Surely this is challengeable with the USPTO?

I see that the patent US 10561392B2 claims " . . . a miniaturized rectangular prism having at its bottom side two slots for passing two scanning laser beams and two visible light beams to two targeted skin surfaces on an area of a human . . "

If none of the references you are concerned about mention "prism", that may be a short version of the answer.

There was a question in a comment about publications vs issued patents. As another comment says a granted patent has a sequential number now in the 10 millions and a type code with a "B" in it. Publications have a two-part number, a year/sequential number for publications that year and a type with an "A" in it. On google patent, at this time, you can get from the page for a publication to the resulting patent (if any) by a hyperlink in the short form listing of the application's history. I'm including a partial screenshot with the publication in question as an example. 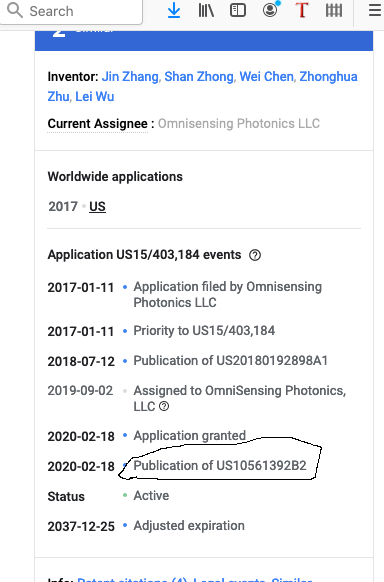 2
A entire procedure of a larger method is already patented, it was found during prior-art search
1
Improvement patents, building your technology on top of already existing technology
2
Patent wo2011137930a1 : most claims seem not innovative
2
How is it decided whether an improvement or new use is good enough?
2
Patenting something that uses components already patented
1
To patent a technology on a smart device and a yet to be made apparatus
1
Patent exhaustion: services utilizing a patented device
2
To which degree can an earlier but inoperable invention still be seen as prior art?
1
Patentability Of Parameter Optimization For Previously Patented Process