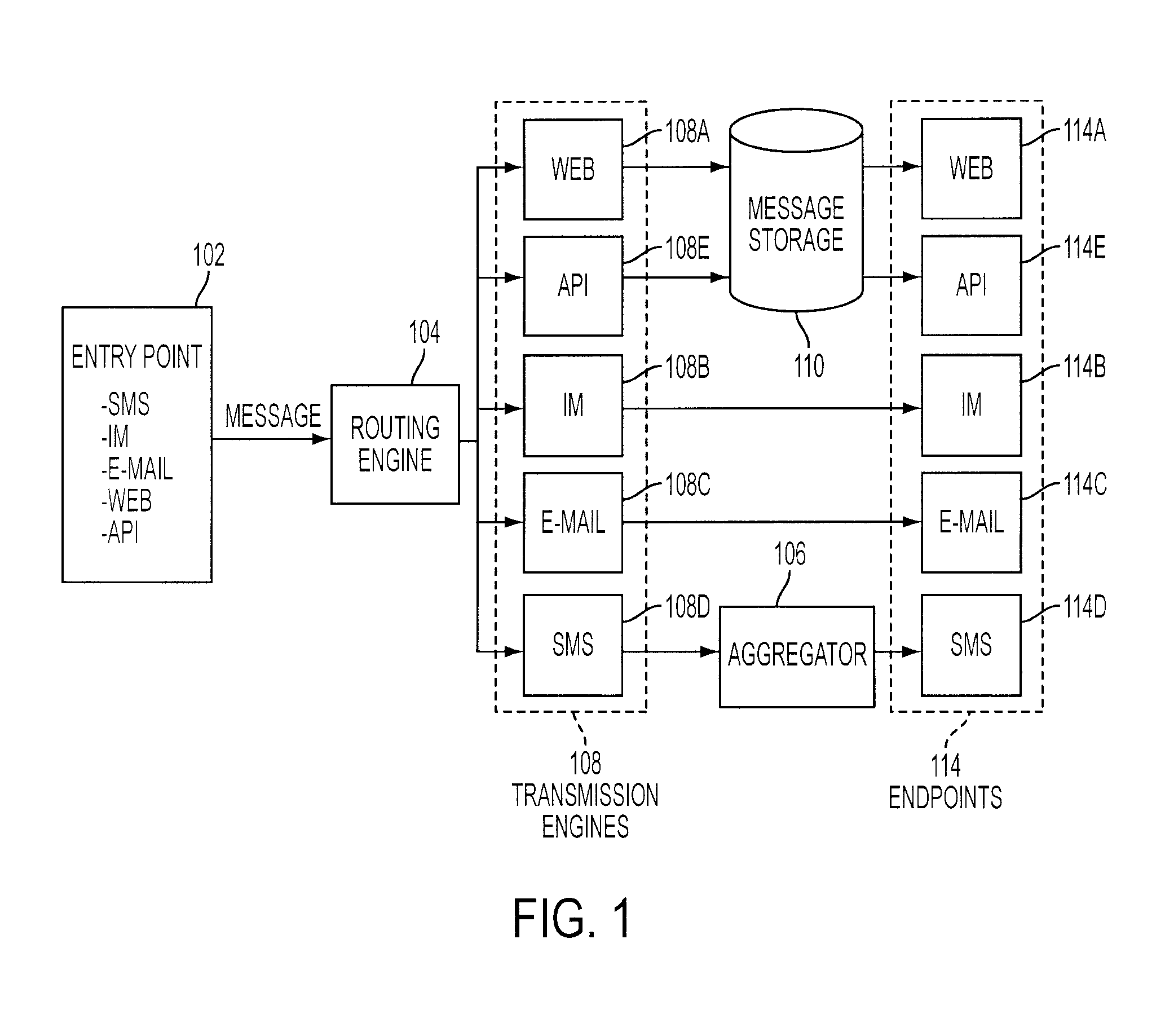 This recently issued patent describes the basic mechanics and functionality of Twitter.

PATENT OVERVIEW: This is the patent that describes the basic mechanics and functionality of Twitter, summarized roughly as:

The first claim contains more steps such as, if the first user tells the system whom they wish to follow, the system records that fact. And when the second user posts a message, the system looks up the list of all users previously recorded as following that user so it knows who to send copies of the message to. And so on.

Other claims are for the computer system that does this.

WHY IT MATTERS: This patent covers the basic functionality of a Twitter-like service.

Are you familiar with technology similar to that described in this patent application?

For details about what makes good prior art, please see our FAQ. If you'd like to contribute in another way, please vote or comment on submissions made below. And we welcome you to post your own request for prior art if you know of another questionable patent or patent application. Thanks for participating!

This document, which originally existed as a documentation web page for an unimplemented project on SourceForge, now only exists as a series of snapshots on Wayback.

The document describes a messaging system with follower/following mechanics, very similar to that described in the independent claims of the patent. Note that Feb 2001 is not only earlier than the application date for 8401009, it is also earlier than all but two of the patents in the "Referenced" list, and those two don't have anything to do with "follower/following". The reason I assert priority over the other references is to point out that one can determine the relevance of Miski as prior art without reading all the other references dated later.

To match Miski with the Twitter-like system defined in the patent's first claim, one must translate or relate concepts as follows:

To assist with reading the Miski document, so that anyone can skip those parts not relevant to the issue of prior art, I have identified three selections within the document that contain all the prior art for this patent:

This patent is an obvious application of the "publish-subscribe" pattern. An earlier implementation of this pattern was the usenet system in 1979 which allowed messages to be posted (published) to newsgroups without any predetermined recipient. Other users were able to follow (subscribe) to newsgroups so that the newsnet client software could track which messages they had previously read. A more detailed explanation of publish-subscribe and usenet can be found simply by Googling those terms.

When it comes to subject-based publish/subscribe systems, there are many, many other systems that may predate even Miski, such as mailing lists, group chatrooms, and message-oriented middleware such as MQSeries/MQ, Tibco, and so on. A quick glance at the cited references found quite a few about forwarding messages to relevant subscribers (although I didn't find any where the subscription is for a user).

Additionally, it's important to realize that the claim has many requirements other than following posts. The first claim is as follows:

A method for device-independent point to multipoint communication, the method comprising:

receiving from a first computing device of a first user a selection of one or more endpoints for receiving update messages;

receiving, from the first computing device, a request to follow a second user;

applying, for each of the plurality of followers, rules to the update message based on the addressing information;

translating the update message into an appropriate format for each of the endpoints; and

broadcasting the update message to each of the endpoints in the appropriate format.

As such, the claim is not only about following users and broadcasting posts to followers, but also about "applying rules" based on "addressing information" to those posts and "translating" them to "appropriate formats" based on the devices associated with the followers. (Plenty of prior art around for those aspects as well, including in the cited references, but the combination of all these aspects is what made the claim novel and non-obvious. Conversely, one must perform all the elements in the claim to infringe.)

Col. 8:4 references corporate accounts where the regional manager can be on the receiving end of sale rep communications. All contacts go through a dotbounce hub so the message is not sent to anyone. Rules of the forward impact formatting.

Hate to tell you but that is what the '455 patent is. The big question is who is Meyer Cordless LLC?

__ Edit - answered my own question - Looks like it is affiliated somehow with IV.

'455 discloses the receiver controlling the flow of the email - Non-sender notifies and controls routing of the incoming message.

Is there is a particular element in the '009 claim that is lacking, point it out. Please reference the claim.

Some of this patent's claims also hinge on the fact that a Tweet is processed and pushed out to multiple transports (email, SMS, web, IM...) and users may consume these messages with multiple clients.

At least one open-source system had these capabilities for almost a decade prior: XMPP, the Extensible Messaging and Presence Protocol, also known as "Jabber". XMPP was created in roughly 1999, and IETF standards were produced in 2004 (http://xmpp.org/xmpp-protocols/rfcs/). There have been many implementations of XMPP servers over the years, especially when interoperability was a concern. Until recently the chat system within Google's Gmail, Hangouts, and Talk system interoperated with other chat systems via XMPP.

Admittedly, XMPP's communication model is very different from Twitter. XMPP is based on person-to-person instant messaging, although a variant of the protocol could be used for chat rooms. XMPP has no notion of blogging and passive reception, aka the "message without a recipient" model that Twitter touts as its unique feature. XMPP is an XML-based protocol, designed to 'tunnel' over anything that can handle a long burst of text. Twitter is not a protocol at all, but a single service.

I only mention this system to make it plain that these claims are not unique to Twitter:

None of these are really patentable. While Twitter created a brilliant product with brilliant execution, it was a blending of two already-existing ideas:

One of the creators of Twitter, Evan "Rabble" Henshaw-Plath, confirmed as much in a recent talk given at the OHM 2013 conference, on August 2, 2013, where he named many precedents for Twitter as direct influences.

The innovation here was not technical innovation so much, but in product design. In previous broadcast SMS systems, one had to manually define a list. With Twitter, it was defined by the other users who followed you. And the blogging sites which had a concept of 'followers' typically focused on long-form diary entries, unsuitable for Twitter's vision of a stream of instant, short messages, shareable to mobile devices. But great product design, however praiseworthy, doesn't deserve a patent.

As for blogging with followers lists, Henshaw-Plath named Facebook. But I would go back a bit further, to the blogging platform LiveJournal, which had almost all of these features, almost from its inception, in 1999. It began as another blogging platform but rapidly became about the network of users who "followed" each others' blogs.

LiveJournal is not well-known today, but in the early 2000s it was one of the leading social networks, especially for teens and young people. It even briefly appears in the movie The Social Network, since the real-life Mark Zuckerberg was a user before he created Facebook.

As for SMS with distribution lists, there were many similar services that predated Twitter. Some of them were explicitly for social sharing, like Dodgeball (founded 2000). Henshaw-Plath cited TXTmob, which was used for protest actions during the 2004 US Elections, as one of the major inspirations for Twitter. Henshaw-Plath also related the same story about TXTmob in comments to a chapter of a book about Twitter. Those comments seem to be removed from the site today, but they are still available on the Internet Archive's cached copy from 2009. You can also find a description of a system created by Microsoft Research in 2005 (http://research.microsoft.com/~counts/pubs/slam_jcscw_leisure2.doc)‎ that allowed for the creation of such distribution lists on mobile devices. Other sites like 3Jam and Yahoo's experimental service MixD offered similar services in the mid-2000s, contemporaneous with early Twitter (http://www.minger.net/2006/11/30/yahoo-launches-group-sms-service-mixd/). To be honest, you can probably find all kinds of papers and products by just searching for "group SMS text 200x" and replace X with a digit. It was a hot area of research at the time, and many group SMS services were sprouting up.

Point by point, here we go:

A method of communicating among users

Well, pretty much everything on the Internet is. But these systems described above are very much like Twitter, used primarily for self-expression, and sharing with one's friends.

One user (the "first" user) can "follow" another user (the "second" user).

LiveJournal had that, although it was typically called "friending".

The "second" user can post a message. The message is not posted "to" anyone, it is just posted.

LiveJournal qualifies. While one could read the LiveJournal of a user as if it was a blog, that was just one way of consuming the stream of messages.

All followers of the second user receive the posted message.

The notion of 'receive' is a little bit fuzzy here. Even on Twitter, users do not necessarily receive the message. Instead, they have an account which is configured to 'follow' certain Twitter accounts, and their devices may request portions of the chronologically-ordered combined stream. When Twitter is used in that way, through its web interface, it's analogous to LiveJournal.

However, in its earliest form, Twitter also instantly pushed messages out to SMS and continues to provide similar alerts to with its mobile apps. LiveJournal never did anything like that. To find an analog you have to look to the group SMS distribution systems I referred to above.

The first user can choose from a set of possible methods for receiving messages.

LiveJournal had that early on. One primarily read through the web, but an API as well as RSS feeds were added, and soon clients for many different platforms appeared.