Is patent US 8011122 B2, a Novelty Video Device and Method, valid or could this patent be easily circumvented?

To my understanding the underlying components and software could be completely different from what the Assiognee company, Americhip, is using in its products.

To my reading this patent is for a video module attached to a piece of card stock. The description seems very general. Is there any way to circumvent the patent?

Any knowledge would be greatly appreciated, as you can see I do not know much about patents. Thanks

at least a first page and a second page that are movable between a closed position and an open position; 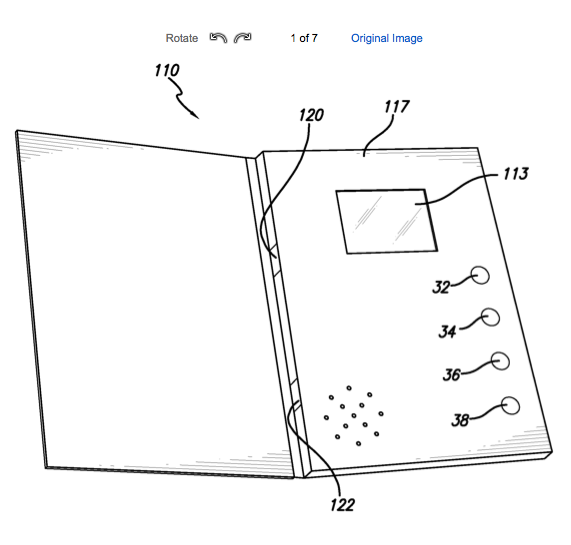 Off hand, it looks like all the claims require a "switch" to determine when a page is turned in order to know what page the reader is on. You might try to design around it by coming up with a way that doesn't use a switch. I put switch in quotations because a study of the specification would be needed to understand how broadly they are using that term. For example, would RFID sensing be a switch? Or under the doctrine of equivalents might it be substituted for a switch?

Very basically, it is the claim words that define what they say is theirs. Generally to get in trouble you need all of the elements they have in a particular claim for that claim to "read on" your thing. If you are planning to do this commercially I'd get real advice from a patent attorney.

Not the answer you're looking for? Browse other questions tagged invalidation video method us8011122 .