AN OVERBROAD PATENT ON TRANSLATING USER MESSAGES - This application from Nhn Corporation seeks to patent the idea of...automatically translating IM messages from one language to another! 10 minutes of your time can help narrow US patent applications before they become patents. Follow @askpatents on twitter to help.

QUESTION - Have you seen anything that was published before Dec 21, 2011 that discusses:

Summary: [Translated from Legalese into English] Within a messaging application, translating received messages from a 1st language and displaying them in a 2nd language.

A method for providing an interpretation service using a messaging application, the method comprising:

A method for translating IM messages:

Good prior art would be evidence of a system that did each and every one of these steps prior to the Dec 21, 2011.

You're probably aware of ten pieces of art that meet this criteria already... separately, the applicant is claiming translation in REAL-TIME, using PUSH NOTIFICATION. 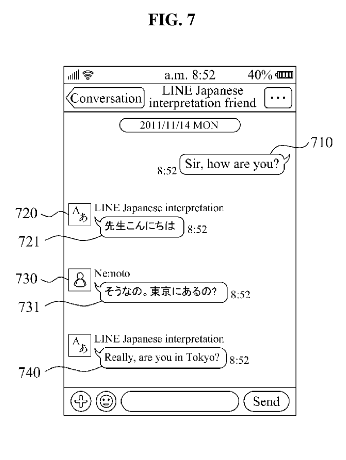 This patent relates to inline translation of SMS messages. 2003. Patent US7272406

Is SMS vs. the generic term "IM" enough to invalidate this?

I think I've found prior art. Specifically, an instant messaging tool which can automatically translate the sent message from one language to another.

QQ International, which is an "easy to use messenger which focuses on connecting people in China while constantly putting the most useful China-related information into users hands." It contains a translation feature which will translate a sender's message into a second language.

When was it published?

The translation feature shows up in the manual on Aug 16, 2011 in the Wayback Machine.

The app itself appears in the Wayback machine on August 1, 2010, but does not appear to contain the translation feature at this time.

What, specifically, did it do first?

It will automatically translate a sender's message from one language to another before sending it to another party, assuming the user chooses "Translate and send message simultaneously" in the settings. It'll translate it manually too, if you want to click a button (unsurprisingly, "Translate") or hit a keystroke (ALT-E).

although there is a mention of more than "50 languages", no others are specifically listed.

Does it cover the specific points asked for?

Yes. The key here is that the sender can send their text in two languages in one shot - the first language, and the second (translated) language. They do this by turning on the "Attach original text using translated comment" setting.

Translating the message of the first language into a message of a second language; and

Yes. As mentioned before, this is done on the sender's end, either automatically with another setting or manually via a keystroke/button press.

Providing the message of the second language in the conversation session.

Yes. The second (translated) part of the message is also sent.

Turning on the "Translate and send message simultaneously" would achieve the real-time translation desired.

I think a case can be made for push technology as well, considering that it implements the concept of groups. You join a group - the "subscription" part of push technology, similar to a channel After being confirmed, you're then in, and then receiving messages from other members of the group. When any member of the group sends a message, it's pushed to your client application. It is very likely that the messages hit a central server, rather than peer-to-peer, but I do not know for sure. Any member of that group could then use the translation feature to send their text in the first and second languages.

There is a work from 2004 (with screenshots). See related works too.

The both translated and original messages are displayed.

I believe that good prior art for the real-time translation of instant messages with push notification is:

Claim 1. A method for translating instant messages exchanged between two or more devices over a network by one or more users that communicate in different languages

Claim 13. A system for providing real-time communication over a network between two or more devices to support multiple languages

[0029] Referring again to FIG. 4, the content translation module 154 is shown as being at a network address xxx.yyy.zzz, and located at a location separate from that of the source device 142 and destination device 144. However, the invention is not limited to this configuration. Those skilled in the art will appreciate that the content translation module 154 may be located within the same network as the source or destination device, such as within an intranet or network cluster having the same domain in or network location as the source and destination devices. FIG. 3 provides only one example of a network configuration suitable for practicing the invention. Any network configuration that allows for the operation of the content translation module 154 is within the scope of the invention. Furthermore, any means by which messages can be translated dynamically—interactively during the session—and without extra effort on the part of the user, is within the scope of the invention.