AN OVERBROAD PATENT ON Wireless Audio - This application from Logitech seeks to patent the idea of...Forwarding a media stream from a first media output device to a second media output device! 10 minutes of your time can help narrow US patent applications before they become patents. Follow @askpatents on twitter to help.

QUESTION - Have you seen anything that was published before 8/25/2011 that discusses:

You're probably aware of ten pieces of art that meet this criteria already... separately, the applicant is claiming A reference to anything that meets all of the criteria to the question above AND ALSO where the first media output stream is terminated when it is streaming to a second media device 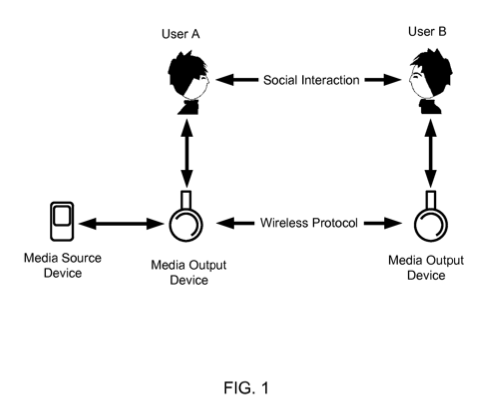 Apple's AirPlay technology/branding (September 1, 2010) seems to fit the bill. One can stream audio/visual streams, for example YouTube/NetFlix/etc to iPhone/iPad to AppleTV. Unfortunately I have been unable to find a document detailing everything, but I have identified some Apple patents that may apply:

This looks like it was preceded by http://www.google.com/patents/WO2006133764A8 "A method for establishing a paired connection between media devices"

It mentions a mesh network between separate Sonos devices. The date published mentions 05/13/2004, but the document has been updated in 01/07/2013.

VLC media player has had this functionality for many, many years (very handy to do multi-room audio at parties for no cost!). See (dated 2005): http://www.videolan.org/doc/streaming-howto/en/

The page linked above demonstrates all of the three required criteria for prior art but does takes some reading to fathom. The first page I found that walks you through it I've linked to below, dated 2009: https://github.com/videolan/vlc/commits/66d45378d23e7420a5facdcebf83aab95459a3fc/modules/gui/macosx/wizard.h

VLC is open source and stored on GIT, as such it's trivial to confirm at the code level when a feature was added, to help a little the code for the wizard (in Mac) has a header file with a date starting in 2005: https://github.com/videolan/vlc/commits/66d45378d23e7420a5facdcebf83aab95459a3fc/modules/gui/macosx/wizard.h

Windows Media Player version 12, released in 2009, has the Play To functionality, which does precisely this. See this Wikipedia Article. http://en.wikipedia.org/wiki/Windows_Media_Player.

prior-art-request pre-grant us20130117693 logitech wireless-audio or ask your own question.