What is a "Lapsed Patent" and which concepts (if any) may still be protected by this Patent?

According to Google Patents, US 6,148,942 is Lapsed and according to Public PAIR its status is Expired as of 2008. 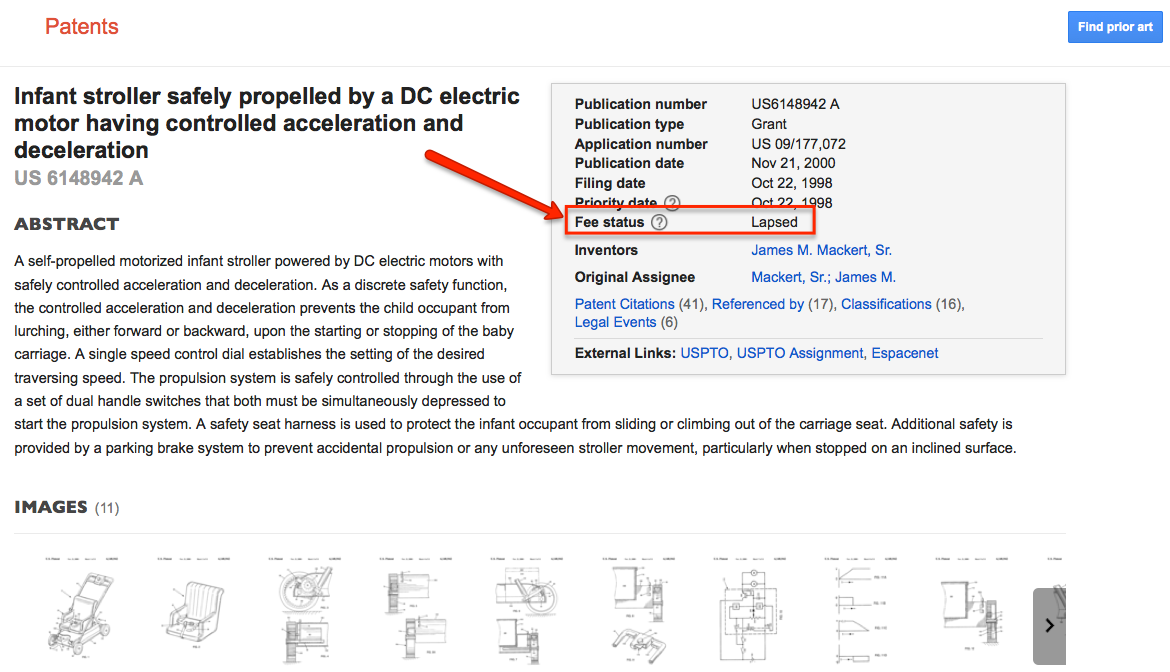 Does that mean that a self propelled stroller as described in the claims if actually created/sold by third party would not infringe on the subject patent? What would be required for the the assignee to revive this patent, or is it too late for the assignee to recover his rights?

Lapsed patents are patents that expired because the maintenance fee was not paid in due time.

Maintenance fees on US patents are due 3.5, 7.5 and 11.5 years after grant of the patent (in many other countries, they are due every year and are called annuities). US patents maintenance fees cannot be paid more than 6 months before the due date. They can be paid for an additional six months after the due date with a surcharge (this actually is a provision of the Paris Convention).

The USPTO provides a web application to view the payment windows for each maintenance fee. In this specific case:

The same application (and Public Pair) shows that the second maintenance fee (8th year) was not paid. Hence the lapse.

However, lapsed patents can be revived under certain conditions. Usually, including in the U.S., patents can only be revived if the proprietor convincingly argues that payment delay was unintentional or unavoidable. In the first case (unintentional), there is a specific time window of 24 months after the close date (in this case 11/21/2010) for filing such a petition, and Public Pair shows that none was filed for this patent. There is no time limit for the unavoidable reason, but it's much harder to argue.

Please note that patents are often grouped in families, with continuations or extensions in other countries. An applicant may let a patent lapse and abandon a patent to save on maintenance fees, while protection could be granted through other patents of the same family.

. A patent that has expired due to non-payment of maintenance fees can theoretically be revived by its owner by petition to the USPTO. The grounds are "unavoidable" and "unintentional". The criteria for establishing that it was unavoidable are a high bar:

(from 37 C.F.R. 1.378 ) 3) a showing that the delay was unavoidable since reasonable care was taken to ensure that the maintenance fee would be paid timely and that the petition was filed promptly after the patentee was notified of, or otherwise became aware of, the expiration of the patent. The showing must enumerate the steps taken to ensure timely payment of the maintenance fee, the date and the manner in which patentee became aware of the expiration of the patent, and the steps taken to file the petition promptly.

Unintentional is much easier to satisfy, at least initially to the USPTO. However the same CFR 1.378 says:

Any petition to accept an unintentionally delayed payment of a maintenance fee filed under paragraph (a) of this section must be filed within twenty-four months after the six-month grace period . . .

If the inventor is no longer living, the patent rights were most likely part of his estate.

The net of this is it seems very unlikely this could be revived. Even if it was revived, anyone who started production while it was expired may have "intervening rights" that would allow them to continue what they were doing. Of course this patent being dead doesn't mean there are not other patents that might cover the specific embodiments it describes or other aspects of something you might make.

This is important - A lot of the info on the Internet about this is out of date. They changed the rule on this recently.

The short version is that if a patent holder pays both the maintenance fee and a late fee, they can revive a lapsed patent any time at all, until the 20-years-from-filing date on which the patent would have expired anyway.

(This 20-year limit can also be changed by a terminal disclaimer, and by PTE patent term extension or PTA patent term adjustment, and there's a different 17-years-from-issue expiration date for patents filed before June 8, 1995. But, that's a separate story; see http://www.uspto.gov/patents/law/patent_term_calculator.jsp#heading-3 for details.)

Zombie Patents: Stronger Than Ever

Until recently, a patent which expired for failure to pay a maintenance fee could only be revived as unintentionally abandoned within 24 months of the date the maintenance fee was due. While a petition to revive an unavoidably abandoned patent could be made at any time after the patent’s expiration, the “unavoidable” standard was almost impossible to meet.

Recent changes to Title 35 of the U.S. Code effected by the Patent Law Treaties Implementation Act of 2012, Pub. L. No. 112-211, 126 Stat. 1527, eliminate the unavoidable standard and remove the 24-month time limit to reinstate an unintentionally abandoned patent. Now, any patent which has expired for failure to pay a maintenance fee can be revived, at any time, upon a statement that the delay in paying the maintenance fee was unintentional. 35 U.S.C. § 41(c)(1). Similarly, any patent application that has gone abandoned for an unintentional failure to file a timely response can be revived at any time. 35 U.S.C. § 27; 37 C.F.R. 1.137.

Not the answer you're looking for? Browse other questions tagged expired-patent lapsed-patent reinstatement us6148942 .

6
Is an expired patent in the public domain?

1
Is there any value to this patent?