Priority Date: Seeking Prior Art from before Aug 1, 2008

Isn't this application US 20100030834 trying to get a patent on half/partial carries? This technique has been used in many microprocessor since the early 70's... Also, the application has this jewel:

Which is not even true for many of simplest 8-bit processors available. Take the venerable 8051 for example:

daa ; The decimal adjust instruction that uses the half carry

mov bcd_r, a ; The two nibble result is stored in bcd_r, with carry indicating overflow

Note that according to Public PAIR the patent was allowed by USPTO on July 19, 2013. Under the AIA it is not be possible to submit prior art under the pre-grant process used by Ask Patents. Prior art which is found below can be easily submitted anytime after grant under 37 C.F.R. 1.501 Citation of prior art in patent files however it will not be looked at by the USPTO unless something else happens. If you want something considered by the USPTO rather than just put in the file, you could submit an ex-parte reexamination request. For a business method patent or for a patent from an application filed after March 15, 2013 one can a petition for a post-grant review during a 9 month window or after that can petition for an interpartes review (These could be done by a company or an individual but all the options are expensive and the PGR and IPR are quasi-litigation proceedings before the board.)

It is very important to look at the Claims of the Patent rather than Abstract or the Title.

Moreover, the claims which were allowed are substantially narrower than the claims listed on the Google Patent page for this application.

Here is the allowed Claim 1:

You can see this on Public Pair. I recommend you search by the Publication Number "US 20100030834 A1" not by the Application Number. You'll want to look at the "Image File Wrapper" section of the record: 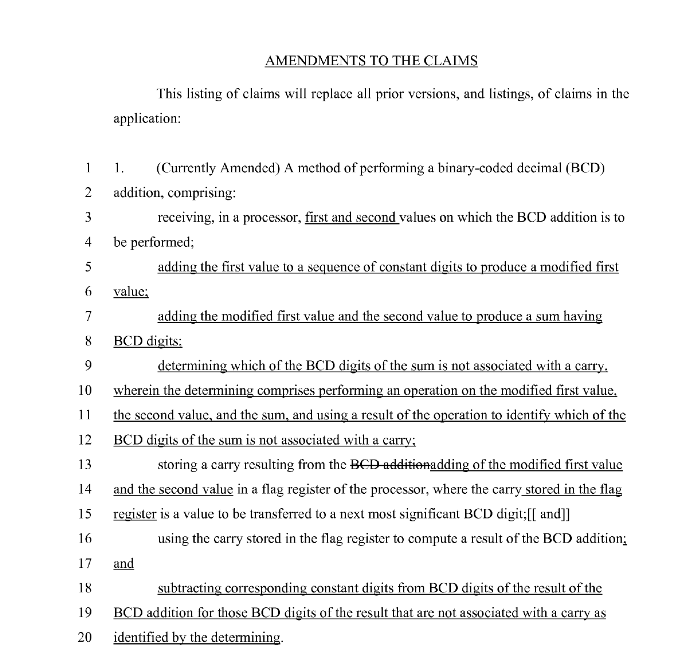 First, allow me to express my sheer astonishment that BCD is still even slightly relevant in the 21st century. This appears to be a pure software algorithm designed to work around the fact that modern CPUs no longer include BCD related instructions; for example, AMD64 drops the AAA, AAD, AAM and AAS instructions that were present in x86, and reuses their opcodes for other (much more widely useful) purposes.

The patent is, as usual, very difficult to read for the purposes of understanding the algorithm embodied in it, so rather than provide prior art here, I will simply describe the algorithm more clearly for computer people.

NB: these are the amended claims a described by another answer.

It is worth noting that I only had to read the claims and think for a couple of minutes to determine what the "adjustment constant" and the remaining details of the algorithm were. I consider it highly likely that some competent computer scientist has done so before me, without the benefit of the patent claims. The trick, of course, is figuring out who and when.

I did spot a disingenuous comment in the Description of the patent, suggesting that BCD "allows for faster decimal calculations in electronic devices." Since the above code would compile to roughly a dozen instructions (depending on the CPU involved) for a simple addition, and would have execution time comparable to a multiply on conventional binary numbers, this claim is laughable.