This patent covers the hardware design of a multi-camera array of video cameras making up a spherical or 360º panoramic video system.

The whole idea is fairly obvious and already exists in a number of commercial systems, so I'd like to know if anyone would be able to help to post concrete examples of prior art here which can show as many of the claims as possible as not novel or obvious in this patent application.

The Panoptic camera out of École Polytechnique Fédérale de Lausanne in Switzerland fits the bill pretty nicely. It has over a hundred cameras with specialized hardware to create stereoscopic omnidirectional video in real-time. Very cool stuff.

It seems that work started on this in 2009, which is before the priority date, but there have been papers are recently as 2013, so not everything here may be prior art.

There's a YouTube video of it in action (could have picked more interesting imagery though). I'm not sure whether it has audio, as required by the claims, but the idea of adding audio to video seems pretty obvious. Here are a few PDFs describing it in more detail: 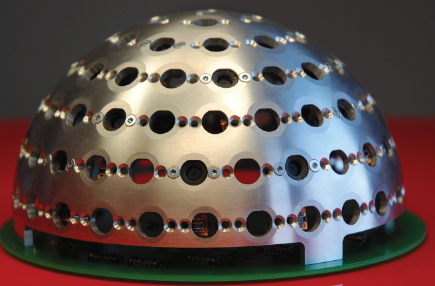 I like the swiss Panoptic camera mentioned in here. It covers most of the claim elements well. However, I think it misses the audio component.

Concentrating on the "audio" part, here are references to combine with the Panoptic camera (or other panoramic camera devices).

The invention discloses a SCU (site control unit) capable of controlling the operation of a plurality of cameras, see Fig. 7. In addition to the video cameras 22, audio microphones 52 may be employed about the premises. The cameras 22 may incorporate the microphones, or the microphones may be separately installed. Audio received by the microphones is processed by an audio processing module 54 of the SCU. Audio output signals from the processing are supplied to video compression module 50 for the audio to be compressed. The compressed video signals from the SCU are then transmitted to the system control with interlaced [audio interleaved with video data] compressed audio, thus enabling the operator to also listen in on an intrusion as well as view it. (col 13, 60-) 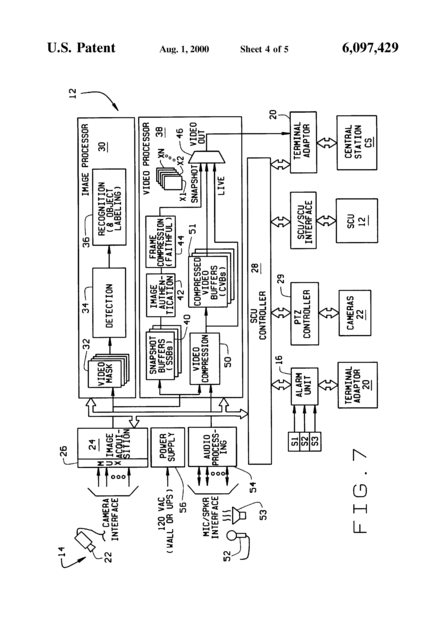 The digital camera for collects an image from one or more image transducers, compressing the image and sending the compressed digital image signal to a receiving station over a digital network. A plurality of image transducers or sensors may be included in a single camera unit, providing array imaging such as full 360 degree panoramic imaging, universal or spherical imaging and field imaging by stacking or arranging the sensors in an array. The multiple images are then compressed and merged at the camera in the desired format... (Abstract).

The camera may contain a microphone, audio digitizer, and compressor that allow captured audio to be conveyed, over the attached network along with the captured video. Audio and video samples are time-stamped to allow accurate synchronization at the monitoring station(s).(col 4:9-13)

As a further refinement, an internal data storage device such as a small disk drive may be embedded into the camera. This allows the camera to collect images and/or video and audio from cameras, which may be located at some inaccessible distance from the facility's data network. (col 5:7-11) 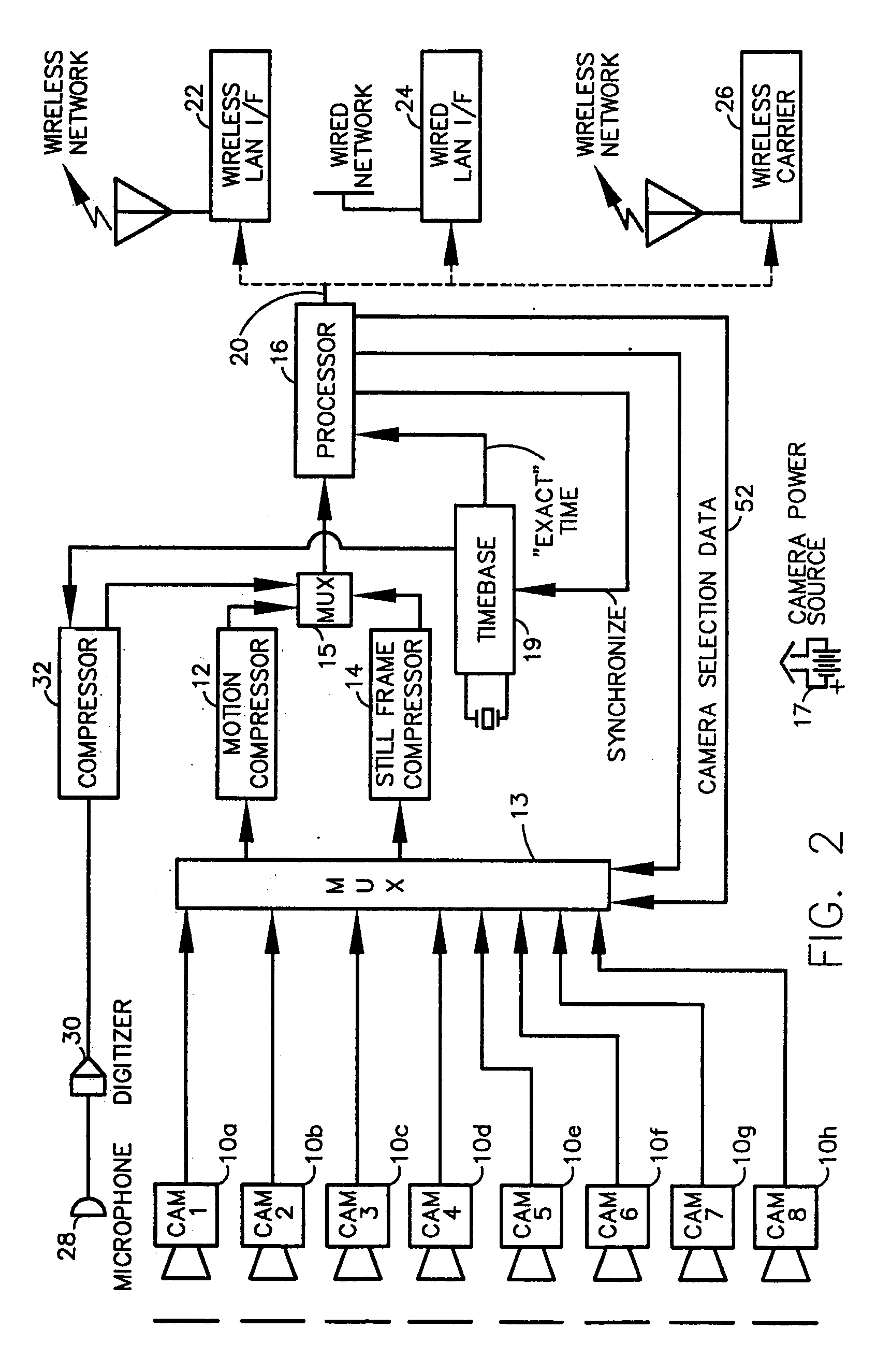 US Pat. No. 6522325 to Sorokin: "Navigable telepresence method and system utilizing an array of cameras" granted in 2003. 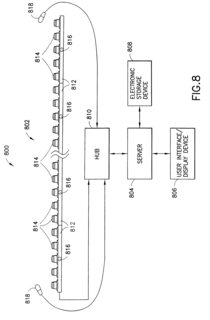 This reference might prove that is was obvious at the time of the invention to add audio to a multi-camera system, e.g. for telepresenting.

Panoramic Photography has been around since the earliest of times when photographers stitched together negatives to create a panoramic image. Sometimes, in art exhibits you would see a complete 360 viewpoint by the photographer printing individual prints and posting them up onto the spherical room walls and ceiling. As the digital age came about, photographers were able to use software to stitch together their images (i.e. photoshop) and create the panoramics that way. As Video came about, 360 degree video became available to the public to create and view. Multiple cameras have been used for a long time in the iMax theaters to create completely immersible experiences for the viewer - first with limited nature films and now with full length feature films.

As far as video goes, May 25 2007. Google has effectively done spherical video with their street view program. It's effectively a video with a low framerate, and manual framerate advancement of a car driving around the city.

Sounds a lot like the Nissan around view monitor. Pretty sure that they don't use audio, and probably don't record the stream. Hope this helps http://www.nissan-global.com/EN/TECHNOLOGY/OVERVIEW/avm.html

This is important information, too important to be hidden in the comment section:

During patent prosecution, claims can change drastically and then they differ from the patent application publication.

Therefore, it is not sufficient to copy&paste the claims from the patent application publication. It is of paramount importance to access Public PAIR and check what the current language of the claims is!

The community needs to have the latest version of the claims to find relevant prior art!

How to retrieve the current claims:

In this application's file wrapper you find an amended (2013-07-01) set of claims right at the top of the document list.

Thus, at this stage of the prosecution claim 1 reads as follows:

Many panoramic cameras have already been described in previous comments, most if not all of them existing before the patent application.

I believe the following systems were also designed prior to the patent application:

According to me it is a non-sense to claim such patent.

We use since years 360° Video solutions... so what is there do make a patent with old thinks. So where is the patent worthy idea and the new mind