How can we fix the patent office to stop granting such non-innovative and all-encompassing patents?

Ex: Apparatus and methods for automated observation of objects (US 5351078 A) has the following abstract:

"Apparatus and methods are disclosed for automatically inspecting two- or three-dimensional objects or subjects. A detector and the object are moved relative to each other. In one form, a detector, such as a camera or radiation receiver, moves around an object, which is supported to be rotatable such that the detector may receive electromagnetic energy signals from the object from a variety of angles. The energy may be directed as a beam at and reflected from the object, as for visible light, or passed through the object, as for x-ray radiation. Alternatively, the detector passively receives energy from the object, as in an infrared detector. The detector generates analog image signals resulting from the detected radiation, and an electronic computer process and analyzes the analog signals and generates digital codes, which may be stored or employed to control a display."

How can we fix the patent office to stop granting such non-innovative and all-encompassing patents?

This patent is a good example of how our patent system has been reformed. Take a look at this clip from its front page: 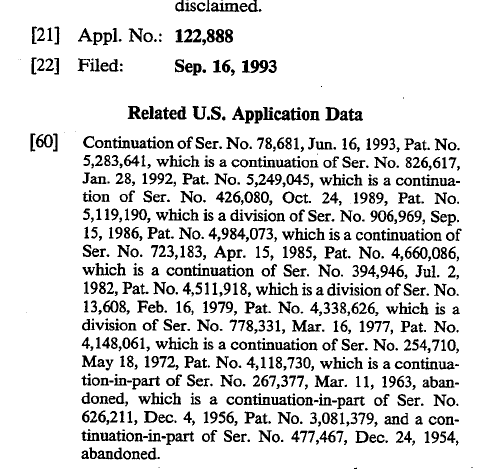 The application this patent issued from was filed in 1993. It is true that the claimed subject matter was not innovative in 1993. However, the original text was filed in 1954 ! Presumably it was innovative then. Even if the filing date is 1993 the examiner must put himself back to 1954's technology when examining it.

Now, now and why did this happen? The inventor, Jerry Lemelson was a famous and prolific inventor. He was very creative and was a visionary. He was also a supreme practitioner of "submarine patents". These were patents that are conceptually breakthrough but are not practical at the time of filing. The inventors stalls the process or refiles many times (cost $$) in a chain of continuations. A patent gets issued 20 years later; in this case 40 years later!. At that point the hope is that technology has caught up with the idea and it is being used in high volume by companies with deep pockets and has a life of 17 years from then.

"This can't be done now. In the late 1990's the law was changed so that patents expire 20 years from the earliest priority date regardless of when they issue.

Not the answer you're looking for? Browse other questions tagged patentability us5351078 or ask your own question.

2
What is the difference between a provisional and a non-provisional patent application?
2
How similar does non provisional and provisional patent have to be?
3
How can I protect a new form of physical fitness, using conventional workout routines and moves, on an non-conventional surface?
0
I have a similar product manufactured in Europe since 2009. How do I oppose the granting of this patent application?
1
How can I Patent features, functions, and devices without details?
1
Does my invention infringe on this hardware/software system?
0
Are patents WO2015191648A1 and US20190365145A1 valid? Another older patent covers claims 1 - 4. What to do in such a case?
0
How can US20200206098A1 be patent-worthy when FR3037791B1 discusses the same things?