Looking for additional prior art for this Raytheon patent application related to vehicle-based acoustic locating systems.

Claim 1. A method of locating an acoustic source using a plurality of vehicles, comprising: 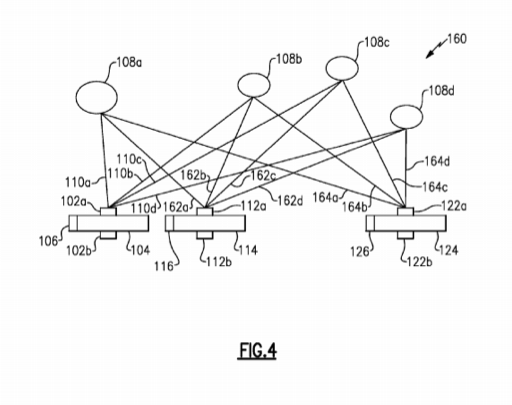 Claim 9 of this patent is related to the following paper. Although the paper doesn't refer specifically to microphones on vehicles it does refer to the main idea of acoustic location using distributed microphone arrays. Attaching the microphones to vehicles isn't in itself particularly inventive. For example, the same techniques described below would work whether the ad-hoc microphone arrays are moving or stationary:

Published August 2011 at a conference in Buenos Aires

DoA of gunshot signals in a spatial microphone array: Performance of the interpolated Generalized Cross-Correlation method

The direction of arrival of impulsive, wideband audio signals, specifically of gunshot signals, is the main interest of this work. The Generalized Cross-Correlation (GCC) method, typically employed for wideband signals, is used in a tetrahedral microphone array to estimate horizontal and vertical angles. An investigation on the performance of the scheme is carried out based on signals recorded in an open air, low-noise environment, and then repeatedly replayed in an open-air, noisy environment, under controlled Direction of Arrival. To increase the accuracy of DoA estimates, the correlation function evaluated between each pair of microphones and used by GCC methods goes through an interpolation process. From this study, we have concluded that the GCC method can perform adequately in the task of estimating the DoA of a gunshot signal even in the presence of strong noise level and lower sampling frequency.

Question - Are you aware of additional prior art for this patent application?