This application is claiming everything that is involved in Bitcoin mining or any other cryptocurrency mining using Asic chips where the block chain is segmented and hashed by multiple parallel hash units and then recombined. I would like to make sure open source cryptocurrency is not patented.

I know there should be something out there that teaches how to speed up mining with the use of GPU or Asic chips that is before July 11th, 2012.

perform a serial data processing algorithm on each of the data paths of the single data register substantially in parallel to produce a result for each data path;

and combine the results produced for each of the data paths of the single register to form the output of the serial data processing algorithm.

The priority date for this application is July 11, 2012, and the assignee is Intel. However, there are six inventors listed, so any prior art from these individuals or Intel in general would avoid any issues regarding burden-of-proof for inventorship if they were earlier than July 11, 2011:

Update (September 5, 2015): This patent has now undergone several office actions, and there has been no amendment to the claims. The inventors are repeating arguments with the examiner during each office action:

Claims 1-20 are rejected under pre-AIA 35 U.S.C. 103(a) as being unpatentable over Sprengers [GPU-based Password Cracking on the Security of Password Hashing Schemes regarding Advances in Graphics Processing Units] in view of Zalewski et al. [Case Study on FPGA Perfomrance of Parallel Hash Functions]. Sprengers teaches the use of GPU programmable ALUs for parallel processing of hashes. Zalewski teaches a proposed parallelizable hash function on an FPGA.

In short, the examiner is not budging on his position, but some additional (more specific) prior art would be extremely helpful in getting this patent rejected. Intel has shown no signs of abandoning this attempt to patent something that arose from the open source community. In the year since this question was posted, there has been no attempt to provide prior art. Where are the open source contributors?

It appears the examiner in this case is already familiar with bitcoin mining--there is a rejection based on that (with specific examples) already in the image file wrapper for this application.

From the non-final OA issued 6/20/2014 (it is a screenshot) this can be accessed via the USPTO's Public PAIR database. 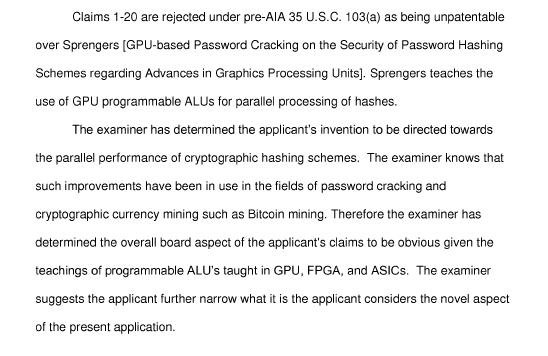 Quite a few references are made, including:

When was the first GPU miner made available publicly?

The idea was first suggested on December 12, 2009 in an online forum.

There is source code available for a GPU miner dated December 24, 2010 (Updated February 27, 2011). Would someone be willing to have a look at this code and compare it to the claims?