I seek to catalog prior-art for this patent application for a Yagi-Uda style antenna using a collection of ground plane style elements resulting in a slick vertical polarization beam antenna system.

Since the Yagi patent goes back to 1926 or so and there has been lots of development since then, this search will likely go way way back in time to find the relevant nuggets.

So far these patents portray the topology and relationships shown in the application antenna array as if they are public knowledge...

These patents focus on providing/adding a way to select either horizontal or vertical polarization to what they seem to infer as previously known vertical pol. Yagi-Uda array. This switchable polarization doesn't apply, or need to apply, to the current patent application, but it is interesting to note the topology of antenna elements is precisely what is portrayed in the "beam forming antenna" application. This suggests the authors of the 1960 and 1977 patents were improving the very system the recent application is attempting to patent.

Anyone else seen a Yagi-Uda array composed of sets of conductors, one vertical, two horizontal, arranged in the beam forming array?

As of 7/9/2014 the application in question has an outstanding non-final rejection that was issued in June. It cites: US3179943 Log periodic monopole array and image ground plane ... 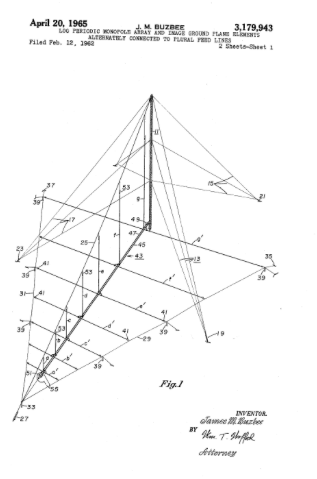 There are several other references mentioned in the Office Action. You can look up the whole history of published patent applications and patents (if filed in the last 10 years or so) at USPTO Public PAIR.